The Real Story Behind Hello Kitty!

Hello Kitty, the iconic white cat with a red bow, dots for eyes, and absent mouth that is mysteriously cute as hell. I used to be into Hello Kitty stuff big time when I was a kid (Hello Kitty stationary and pencil boxes ftw) and still buy Hello Kitty stuff from time to time even now.

If you think about it though it’s amazing that something can be so universally popular yet the average buyer of Hello Kitty merchandise doesn’t have a clue as to what it’s about or what the story behind it is.

HELLO KITTY, HOMAGE TO …THE DEVIL?

In some cases urban legends have stepped in to fill the void of information and you’ll find people out there saying things like the whole Hello Kitty line of toys is the work of the Devil.

Oh you didn’t know? Hello Kitty was apparently started when a mother of a child dying of cancer made a pact with the Lord Of The Underworld ™. If The Devil spared her child’s life then in return she would start a toy company that payed homage to him. Makes sense right? I mean who wouldn’t look at Hello Kitty stuff and not think ‘homage to the Devil’?

Another surprisingly depressing urban legend says that Hello Kitty was first drawn by a child of an abusive parent. According to this legend she drew the cat without a mouth because she wanted a character to confide in that couldn’t tell about the abuse and get her in trouble.

But what’s the real story behind Hello Kitty and seriously what’s up with the mouth thing? 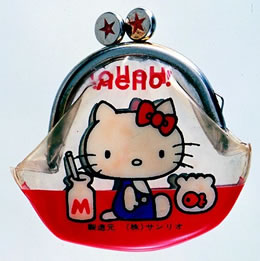 Hello Kitty first came into being in the 70’s when a then new company called Sanrio needed to come up with a merchandise mascot that would appeal to the preteen girl demographic.

They commissioned an artist to work on the project and she came up with a drawing of a white Japanese Bobtail cat that had a red bow in it’s hair and was wearing blue overalls. You can see the original Hello Kitty concept on the coin purse in the picture above, which was the first Hello Kitty product ever.

A whole back story for Hello Kitty was created, which is basically this:

Hello Kitty is actually a nickname for Kitty White, who is not Japanese but actually British and lives in London with her family.

She has a twin sister named Mimmy. The only way you can tell the two apart is by their bows, Hello Kitty wears a red bow and Mimmy wears a yellow one.

She is in the third grade but when school’s out she travels the world making new friends. She is bright, kind-hearted, and loves the outdoors.

But why doesn’t she have a mouth?

HAPPY OR SAD TOGETHER 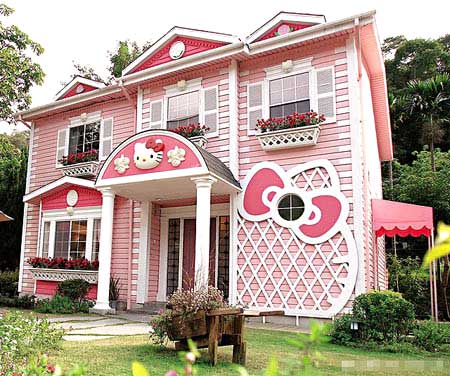 The Hello Kitty character was deliberately designed without a mouth because the lack of that visual cue makes it easier for people to project their own feelings on to the cartoon. Or as one author put it ‘the person can be happy or sad together with Hello Kitty’.

The irresistible vortex of cuteness that is Hello Kitty eventually built Sanrio a multi-billion dollar empire that includes a wide range of products and even theme parks.

Hello Kitty has developed a highly devoted following around the world, even inspiring a new word to come into existence: kitira, it means someone who is a devoted follower of Hello Kitty. Ha take that, Devil.