Mayor Crushes Car With A Tank To Tell A Story 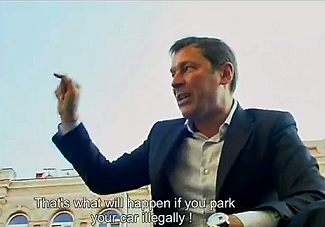 After constant problems with luxury car owners illegally parking in local bike lanes, a mayor turns to a tank to dramatize his commitment to tackling the problem:

It’s pretty humorous how the video portrays what the reaction of the car owner would be. In reality if that was a person who could afford a luxury vehicle he would have whipped out his phone and unleashed an army of rabid lawyers.

But still I thought it was a great way to tell a story and make a point. Plus the mayor got a lot of great PR for himself because the video has spread quickly across the internet, the English version alone has garnered almost three million views in only a couple of weeks.