The Story Of The No-Fridge Lamb Shanks 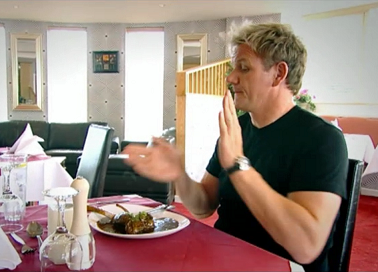 I was watching Ramsay’s Kitchen Nightmares the other day (which basically is a show where the expletive slinging Gordon Ramsay goes into restaurants that are failing and tries to rescue them) and came across something that made me cringe.

This episode like many others showcased a person whose weak cooking and business skills was sinking the restaurant he was responsible for. Also like many other failing restaurateurs this man relied on pre-made food to try and make up for his lack of ability, even though he advertised that everything was freshly made from all natural products etc etc.

But I just about fell off the couch when they revealed what one of the pre-made foods was: lamb shanks suspended in sauce kept in a box and which didn’t have to be refrigerated at all. Oh and the lamb has a shelf life of a year or so.

When Ramsay found out about what the lamb shanks actually were he made a big show out of his distaste for such a thing and refused to eat them. If it were me though I would have at least tried a couple bites, just to see if it tasted off in any way or what.

Later Ramsay confronted the owner/cook about the lamb shanks and asked ‘What the fuck did they have to do to these lamb shanks to get them to be able to be stored like that?’

The guy answered ‘They cook them in chemicals and whatnot’ but that it couldn’t be bad because a lot of the other restaurants around there were serving the same thing. Yum! 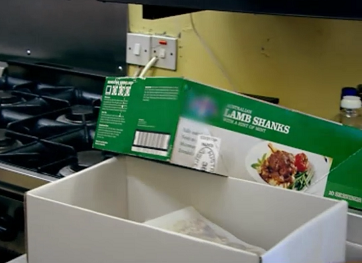 I wonder how common of a practice this is for restaurants, to have meat stored in a box on a shelf for months and months then microwaved when needed and slid out of a pouch onto a plate for some unsuspecting customer to eat.

I guess the only way to really know is to listen carefully when you go into a restaurant. If you hear the sounds of microwaves beeping coming from the kitchen then the food you’re about to eat may have actually been chemically cooked over a year ago.