The Red String Of Fate Binds You To Your Soulmate

There’s an old story in Chinese folklore about a magical connection between two people that are destined to be soul mates, called ‘the red string of fate’.

It’s not the kind of connection we’re used to thinking of, where you fall in love with your soul mate and feel an intense connection to them.

In Chinese folklore the red string of fate is an actual object… a string that’s red (are you surprised lol) but also invisible at the same time. It’s tied to a pinky finger of every person on earth and stretches all the way out to the pinky finger of their soulmate wherever that is, regardless of time and space. Legend says that the string can get very tangled up but it will never break. 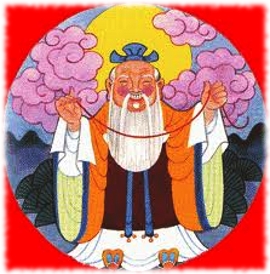 The red string of fate is tied by a being called the Old Man Under The Moon and once he has bound you to your soul mate your destiny is set, no matter what you think:

A boy was walking home one night and was startled to see an old man leaning up against a fence beneath the moonlight. The old man was standing next to a giant bag and flipping through a book.

‘What are you reading?’ said the boy.

‘This is the book of marriages,’ said the old man, ‘I need only use one of the red strings in this bag to tie two people together and they will become destined to be married.’

The boy didn’t believe it so the old man took him into the village and pointed out the young girl that was destined to be his wife.

The boy became angry as he was really young and did not plan on ever getting married. He picked up a rock and threw it at the girl and ran away from the whole scene as fast as he could. 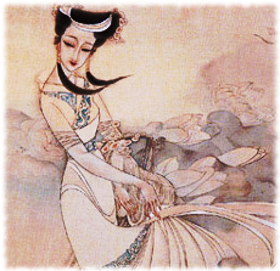 Many years later the boy’s parents arranged a marriage for him and on the night of the wedding the boy (well, actually a man now) nervously lifted the veil covering his new wife’s face.

He was happy to see that she was one of the most beautiful women in the village. But he also noticed that she wore an unusual decoration on her eyebrow and asked her about it out of curiosity.

Flustered, she removed the decoration to reveal a scar. She explained that when she was very young someone had thrown a rock at her and it had hit her in the face right above the eye…

Awkward! The question now is does he tell her he was the one who threw the rock and scarred her for life (I say yes)? And if so at what point does he bring it up, now or later?