Lovemaking With The Mime Was Awkward

If you’re on Twitter I found something you might be interested in. Well first off if you haven’t already, hit me up on @anitasnotebook ;), but also check out the stories at @veryshortstory I think you’ll like them. 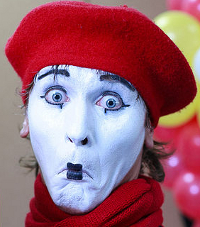 The guy who runs the account basically takes word suggestions from people and builds crazy stories around them. The stories are no longer than the Twitter 140 character limit making them all very hint fiction-ish, which is right up my alley (and probably yours too if you’re into the hint memoirs posted here).

A lot of people are doing little Twitter stories along these same lines but I gotta say that the ones on @veryshortstory are some of the best I’ve seen on Twitter, usually pretty interesting with an off the wall twist.

Apparently some of the stories have been rolled over into a book which is (no surprise) called Very Short Stories. Not sure if I’d want to sit down and read 300 of these in book form 0_o but hey it’s a good way to show some love to the author of the tweets.

Anyway, here’s a few of my favorites from @veryshortstory:

The doorknob rattled. I hid under the covers knowing you were keeping your promise of always being together, after being buried yesterday.

I plugged my thought machine into your mind. I extracted your ideas that would become my best sellers then filled you full of Teletubbies.

My parents found me working the keyboard with my nose. Mom cried. Dad unchained my hands, realizing there was no cure for being a writer.

Lovemaking with the mime was awkward. From what I could tell, she wanted me to pleasure her by riding a bicycle or hiding behind a wall.

What do you think, do you like these kinds of stories Y/N? I really like seeing these little stories pop up in my Twitter feed so let me know if you’ve seen others like it out there :).