You Might Have Heard Of Him: The Man Who Refused To Take Over His Father’s Store

Once upon a time there was a boy named George and all he ever wanted to do when he grew up was to become a racecar driver. 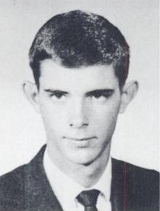 His father owned a stationary store and worked hard at it, thinking that one day his son would take over and continue the new family business.

When George became a teenager he raced cars as much as he could and had lots of fun, until right before his high school graduation when he wrecked his car and was thrown from it during the accident. He almost died that day and while he was recovering he decided not to be a racecar driver after all.

Instead of racing cars he went into college and studied anthropology, there was no adrenaline rush like in racing but at least it wouldn’t kill him. Still, he needed something a little more exciting in his life.

He and some friends started to get into movies and filmmaking and eventually he started to make his own short films. He fell in love with the art of making movies and transferred to a different college so that he could study it.

Meanwhile his father had still been working at the stationary store and methodically building it up into a successful business. But George told his father that he would never take over the store, having a job doing the same thing every day would be too dull of a life for him.

His father was crushed. He had dedicated his life to building this business just so his son could take over and have a stable path to success. His own father had died when he was fifteen and he wanted to make a better life for his son. They got into a big fight and he said to George ‘You’ll be back, making your way in life isn’t as easy as you think!’

So did his father end up being right? Yes and no lol.

Making his was in life definitely wasn’t easy, especially for someone who didn’t like to follow the standard rules for doing things.

He took whatever odd jobs that he could get related to the movie industry and worked his way up over the years.

He eventually had some successes and even started his own film production company, but didn’t make his name in the world until he decided to work on a certain movie about an epic story set in space.

That movie was called Star Wars and today George Lucas is one of the richest people in the world. He never did go to work at the stationary store, but as you can imagine in the end there was no hard feelings about it from his father.