Why The Children Of Cateura Carry Instruments Made From Trash: The Story Of Los Reciclados 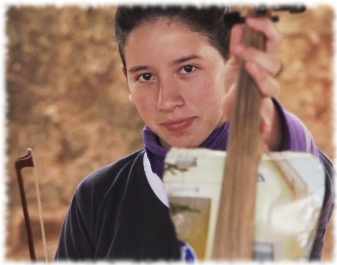 Walk around the city of Cateura in Paraguay and you might see something very strange, children carrying instruments made from trash.

A violin fashioned from a bent up fork and some discarded tin. A cello made from an old oil can and a broken tool that was once used to make pasta. A snare drum made out of…used x-rays?

You might think it’s some kind of kid’s game except for how serious the children are with them.

But as shocking as it is to see the instruments themselves it’s nothing compared to actually hearing one being played. When I first saw a child about to play one of these instruments made out of trash I was prepared to hear something interesting, but… how do I say it… maybe not such a great sound. What I heard instead was incredible. 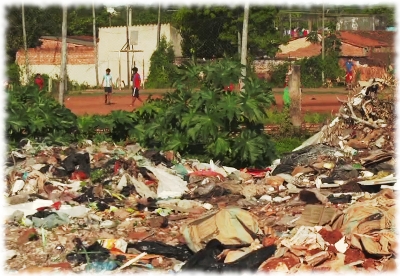 A boy nicknamed Bebi started to play his oil can cello and it sounded amazing. If my eyes had been closed at the time I would swear that it was a regular cello made from wood and not an old oil can and ten other things fished out of the trash.

So how in the world did someone figure out how to make things like old oil cans sound like nice violins and cellos? The answer to this mystery starts with the story of a man named Favio Chavez and what he saw happening in the city of Cateura…

Okay, so here’s the thing about Cateura, it’s a slum city built on a landfill. Most of the adults and sadly many of the children that live in Cateura are ‘recyclers’ at the landfill, they make their living by picking through huge piles of trash to find the bits that can possibly be sold for a little money.

The trash both oppresses and defines the place, and in fact the landfill is called the Cateura Dump. 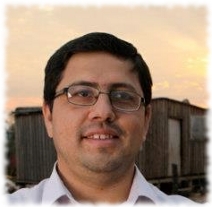 Favio Chavez came to Cateura to work as a technician at the landfill, and over time he started to get to know many of the people that lived there. He looked around and saw the struggles that the people there were having to face day after day, especially the children.

As you can imagine, hope for the future is hard to find when you’re growing up in a place where children have to work combing through mountains of trash each day. The young people of the community often become addicted to drugs and alcohol due to the insane conditions around them.

One day Favio decided to try and help lift the spirits of the kids there in whatever way he could. He had been a music teacher before and so decided to take his own personal musical instruments and start teaching kids in Cateura how to play them. Things got off to a good start but there was one huge problem: there weren’t enough instruments for all the children who wanted to learn. Not even close. 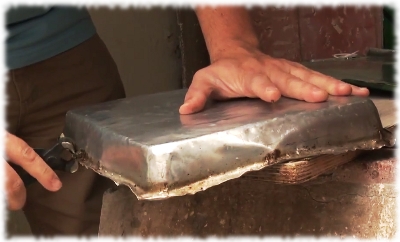 To make things worse, the kids who didn’t have instruments (especially the younger ones) would get restless during the lessons and start to irritate Favio’s boss, possibly even putting the whole program in jeopardy. Favio knew he had to do something.

In Cateura an instrument like a regular violin can be worth more money than a house, so it’s not like there were a lot of instruments to be found just lying around, or were there? In desperation Favio decided to try and make an instrument out of some of the trash that was everywhere to be found in Cateura and to his surprise the sound wasn’t too bad. It still wasn’t nearly good enough but he saw the potential there, if only he could find the missing link to make things work. 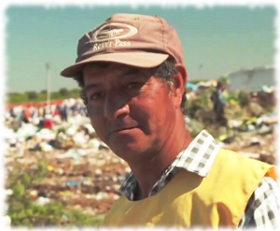 Enter Cola. That’s Nicolas Gomez, nicknamed Cola, and he has worked at the Cateura landfill for a long time. He picks through the trash items that have a bit of hope of becoming useful again and then gathers them up to take back to his workshop.

He had to drop out of school when he was younger to go to work breaking rocks at a quarry but over the years he developed a great skill on his own using the workshop at his home to make discarded items useful again.

Cola had never even heard of Mozart but when Favio brought him a normal wooden violin and asked him to make one out of trash that worked the same, he was up to the task. 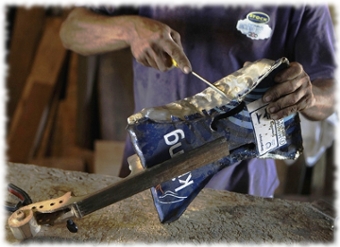 He took measurements from the regular violin and studied it closely. He did his best crafting the landfill violin out of the most promising materials. Then he gave the violin to Favio to be played and… it sounded good! And through trial and error he made more adjustments and the sound got even better.

Cola hadn’t simply made something in the same shape of a violin, he had made a beautiful sounding instrument. Now any child in Cateura that wanted to play music could have their own instrument.

Favio’s music program grew from there, it’s now become an orchestra that he calls Los Reciclados (“The Recycled Orchestra”) and it’s taken the children of Cateura to places you wouldn’t believe. First and foremost it’s changed many of the kids’ lives. The music program gives them something positive in their lives and a way to work through the extreme issues they face living in such a place without needing to turn to drugs and alcohol. For some of the kids it goes even deeper than that, I saw an interview with a girl who during one answer started to tear up and said ‘my life would be worthless without music’.

Favio has teamed up with Maestro Luis Szaran of the Sounds Of The Earth Orchestra and some of the children have traveled the world, touring Europe with the maestro and performing concerts with their instruments made in Cateura. And many of the original members of the have gone on to become part of professional orchestras. 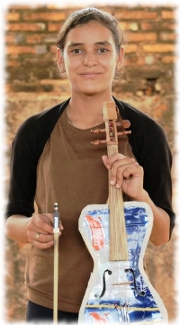 There’s even a movie now being made about Favio’s orchestra called Landfill Harmonic that is documenting what happens when they try to get more children from Cateura involved and try to form a full symphonic orchestra. The older members of the orchestra are learning to craft instruments like Cola does and they hope to help other children by teaching them to do the same.

So why do the children of Cateura carry instruments made from trash?

Because these instruments have the ability to change their lives for the better. The instruments give them hope, and that’s something hard to come by in a place like Cateura.