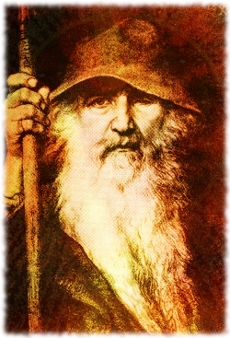 There are many different origins of the Santa Claus that we know today, like St. Nicholas and Father Christmas. Most people don’t know though that one of the major inspirations for Santa Claus is actually the Viking god of war called Odin.

In the old stories, like Santa Claus, Odin is an old guy with a long white beard. But if you’re naughty instead of bringing you a lump of coal he was more likely to deliver a can of whoop-ass.

Odin was famous for being the father of Thor the god of thunder and ruling the sky realm of Asgard. He also liked to roam Earth disguised as an old traveler wearing a cloak, hat, and spear that made him look a lot like Gandalf with a missing eye.

Legend tells us that during a festival in December (called Yule) Odin would lead a group of supernatural beings across the sky in a crazy event called the Wild Hunt. 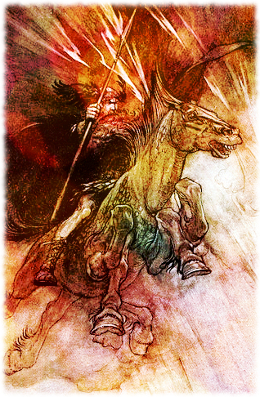 Where Santa flies through the sky on a sleigh with eight reindeer, Odin rides Sleipnir, a fearsome horse with …eight legs.

It was tradition that during this time children would leave their boots by the fireplace and fill them with sugar and hay so that Sleipnir would have something to eat on the journey of the Wild Hunt. In return Odin would then leave treats and small presents in the boots for the children to find when they woke up the next morning.

These days kids all around the world force themselves to stay up as late as possible on Christmas Eve, hoping to catch a glimpse of jolly old Santa Claus daintily placing trinkets in stockings.

But I’m guessing not too many kids back in Odin’s day waited up for him and the fearsome eight-legged Sleipnir, lest they surprise the legendary warriors and make them angry. Still …it would be tempting just to take one peek, after all it’s not every day that you get a chance to see a horse with eight legs :D.