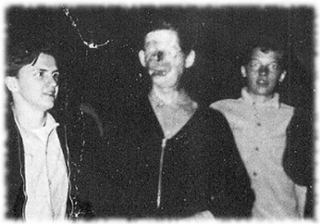 Urban legends have a certain way about them.

The person telling you the story usually heard it from their best friend… who had a babysitter whose boyfriend “saw” it happen.

Or from their nextdoor neighbor’s second cousin, who once lived in the town where it all started. Know what I mean?

The person assures you this urban legend is “definitely true”. Then they go into a story about some character with the head of a man and the body of a moth who steals children after midnight.

But the funny thing is, some urban legends actually are true. And they’re usually the ones you least expect. Take this urban legend from back in the 50’s for example about a man with no face…

LEGEND OF THE GREEN MAN 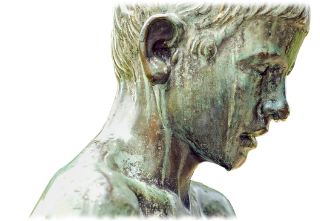 In western Pennsylvania the story is told of Charlie No-Face. It is said that as a boy Charlie climbed a high electric pole to try and see into a bird’s nest.

Instead of getting a view of the nest, he got tangled up in the lines and was electrocuted. And when he fell back to the ground things were never the same for him.

When his friends ran up to him they immediately started screaming. Lying in front of them was their friend …but his face was melted beyond recognition. He had lost his eyes, nose, mouth, an ear, and even one of his arms.
Not only was his face mangled, but his skin had turned an eerie green color.

Charlie had a tenacious spirit, and was able to survive his massive injuries. He was lucky to be alive, he knew that, but as the years went on this new life became more and more difficult to bear. You see, every time he even tried to step out in public people would scream bloody murder and some would even faint.

So he took to hiding out in abandoned houses. He got what food he could from the land and walked along a quiet stretch of highway each night. He just wanted to be normal, he just wanted to feel what it was like to be able to walk openly, without the screaming. 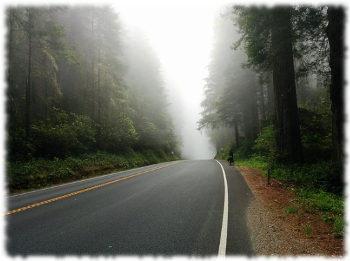 Which particular stretch of highway he was said to walk depended on the version of the story being told. Teenagers from all over would hear these stories and cruise the highways after dark, in hopes of meeting up with Charlie No-Face.

Some claimed they had talked to Charlie or even had pictures of him. But no one could be sure who was telling the truth and who was just trying to look cool. Still, the rumors and urban legends went on year after year.

It wasn’t until after his death that “Charlie” would become known as a real person to the general public.

THE TRUE STORY OF CHARLIE NO-FACE

Yes, he was real. And his story is incredible.

In the summer of 1919 a boy named Ray Robinson was walking home with his friends. It had been a great afternoon of swimming, and they were all smiles as they strolled along and joked with each other. 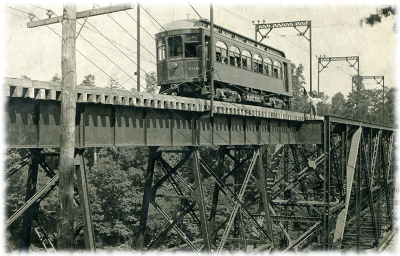 To get home they had to cross The Wallace Run Bridge, a giant structure where trolleys would cross the river. To power the trolleys, the bridge had transmission lines carrying 22,000 volts of electricity running all along it.

While walking on the bridge Ray and his friends saw a bird’s nest up high. They dared each other to see who would be brave enough to climb up there and count how many birds were inside.

Ray was the only boy to follow through on the dare. His friends peered up into the bright sky as he confidently climbed the bridge structure.

But moments later his body connected with one of the lines running across the bridge. His little body absorbed an insane amount of electricity and he fell to the ground. 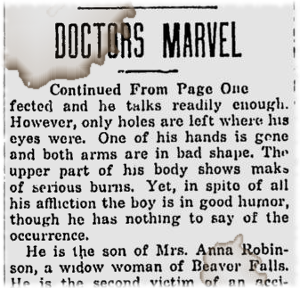 Ray Robinson was not expected to live. In fact, it seemed to be a miracle that the boy hadn’t died on the spot.

His face had been …melted… by the high voltage. His eyes were completely gone and so was his nose. His mouth and his ears were barely there at all. And his left arm had been completely melted off below his elbow.

But living out the rest of his life was going to be the big problem. It was the fifties and there wasn’t any help for children with his level of injuries, so Ray retreated into the protection of his family.

He usually stayed on his family property, doing crafts or talking with his family 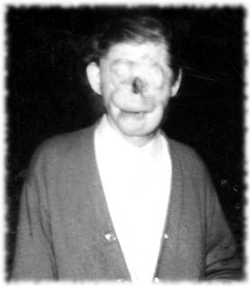 members. He would sit and listen to the radio for hours, getting some sense of connection to the outside world.

Sometimes he would even hike in the secluded woods behind his family home, using a stick to guide himself.

But as he grew older these few things were no longer enough for him.

People driving through from out of town would pull up in front of local gas stations or shops. They parked parked haphazardly and ran into the building yelling for help. They screamed that they had seen a monster walking along the highway.

The locals knew it was no monster. They knew it was simply Ray Robinson out for a walk again.

Ray was now a full grown man and had spent most of his life in a routine that had become suffocating. Throughout the years he had kept up a good attitude about everything. After all, he was lucky to be alive. But, this “life”…was it even like any other human’s life on earth?

One day he decided to do something different. Something new. He decided to walk the roads after dark. Specifically the roads on Route 351. He got his walking stick and left, and didn’t come home until the sun began to rise.

And the next night and the night after that.

His family hated these outings, but they couldn’t stop him. He wanted freedom.

This is how the urban legend of Charlie No-Face and The Green Man began. It was during this time that local teenagers (who were out doing their own kind of freedom seeking) would be cruising Route 351 and see Ray Robinson walking along.

Then teenagers started to go cruising in the area specifically to try to catch a glimpse of Ray. Some began to bring cigarettes and beer as offerings to him, a way to get him to want to talk to them for a while. 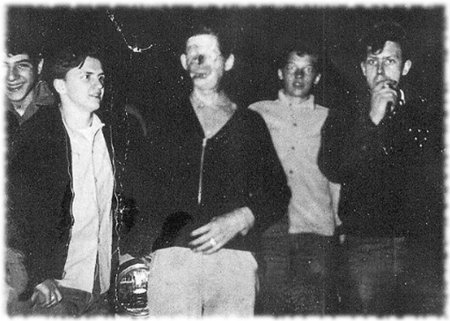 The stories began to spread like wildfire and soon teenagers from far and wide began to make the pilgrimage to the area, to try and see ‘Charlie No-Face’.

Each version of the story gave a slightly different location where you would be likely to spot him. There were also different instructions as to what his favorite brands of cigarettes and beer were. Many versions of the story for some reason said that he had green skin, which gave him another nickname, The Green Man.

Ray wouldn’t always choose to stop and talk to the people who called out to him from their cars, and sometimes he’d even walk into the treeline to hide. But it seems that most nights he wanted the company and would stop to share some beers and chat.

As the years went on and one generation turned into another, Ray and the urban legend of Charlie No-Face became part of the culture. Parents would tell their children stories about him and then when those children became teenagers they would seek him out.

A newspaper article even talked about how soldiers fighting in Vietnam would write back and ask how Ray was doing. The soldiers said they were praying for his safety from across the world.

And all the while Ray kept doing his nightly walks. It seems like he found a little bit of freedom in them.

Ray kept up these nightly walks right up until he was in his seventies and had to move into a nursing home.

For me it’s incredible to think about all those miles he walked in blindness.

All the days and years, sometimes completely alone in the night air. Sometimes with only the company of jeering, immature comments shouted out of passing cars. And sometimes in the company of teenagers, who in a strange way were seeking the same kinds of things he was. They all were looking for a sense of freedom, an experience of life, and to test their limits. 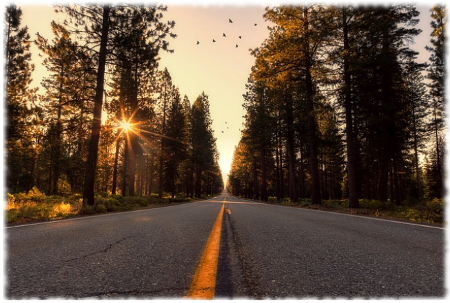 I hope that he was able to find some kind of peace on his nightly walks. It may have been an imperfect sort of peace but at least it was something.

And as far as the urban legend of Charlie No-Face, well that still lives on. To this very day teenagers go cruising around roads in the area. They follow the instructions of the particular urban legend they’ve heard from a friend of a friend whose uncle “saw” it all first hand.

They drive around on the off chance that they might get to see “Charlie No-Face”, and experience a true urban legend.