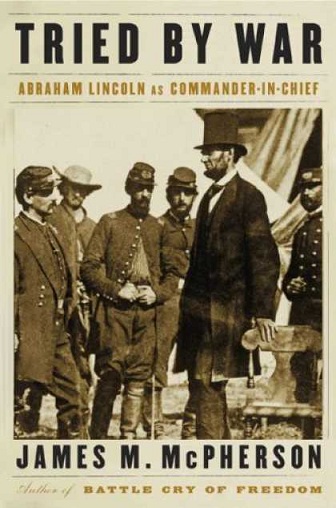 A tall, lanky Abraham Lincoln stands a whole head above the Civil War troops next to him.

The soldiers are all looking at him with…admiration? Respect? Or maybe something else, it’s hard to get a good read from the grainy black and white photo. But one thing is for sure, all eyes are on him.

I don’t remember ever seeing any pictures of Lincoln around other people so it was a bit surprising to see exactly how tall he was. He looks to be a giant compared to the men around him, something very much accentuated by his signature stovepipe hat.

The subtitle on this cover for Tried By War by James M. McPherson indicates that the book is about Lincoln in his role as commander-in-chief. A peek at the book description gives a strong idea of the author’s point of view on Lincoln’s performance in that role with the line:

“[ Lincoln ] quickly established himself as the greatest commander in chief in American history.”

Hmmm. I haven’t read the book but I doubt that I’d be convinced about that. I’ll say this though, he might not have been the greatest commander-in-chief but he surely was the tallest.

This entry was posted in Uncategorized and tagged art, book cover, design, history. Bookmark the permalink.