Against a blood red background a man is leaned over a copying machine, one of his hands appears to be mangled and his foot is twisted. 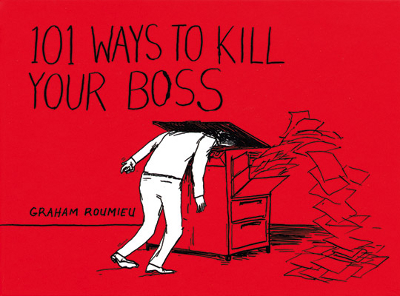 But the thing that really draws your attention is the fact that his head is jammed into the top of the copying machine.

We are looking on from the point of a distanced observer and no one else is in the picture other than the man. Whoever put him in that condition seems to have gone and left him dead in the copying machine while it keeps madly spitting out paper.

Or maybe he’s not dead and is dying before us, his life slipping away with each copy made and piece of paper spat out.

This book cover for 101 Ways to Kill Your Boss by Graham Roumieu gives a taste of what you’ll find inside the book: line drawings of people getting killed in an office setting.

The drawings are presumably to give form to what some people might fantasize about doing when their boss frustrates them:

Doesn’t seem like a book that I’d want to buy but hey then again I don’t work in an office. I looked up some reviews for the book and apparently it’s pretty well liked, even to the point that some people were buying extra copies to give to their co-workers. What do you think, is this something you’d want or is it too over the top for your liking?