A 50’s style painting of a man and a woman decorate the otherwise plain cover of this handbook. They are holding hands and gazing towards the sun through pink and blue clouds. 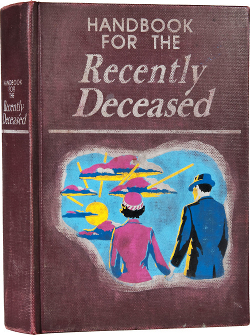 Is the sun setting or rising? Hard to tell but the whole scene evokes a sense of passing over a new threshold, together and with a feeling of some obstacles ahead.

The title reads ‘Handbook For The Recently Deceased’, which I’m guessing is both puzzling and a bit jarring to anyone who first lays eyes on it, especially if they can’t figure out just exactly how they got home and why they don’t seem to show up in a mirror anymore.

And to make things worse when they finally gather up the courage to open up the book and look through it for some answers they find that the chapters read like stereo instructions :p.

In case you didn’t recognize this book it’s from the movie Beetlejuice and is the handbook that ever vexes the Maitlands as they try to keep up with their contemporaries in the afterlife. 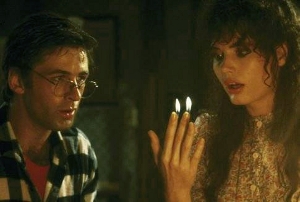 It seems like everybody but them can decipher the bizarre instructions and advice in the book, and they soon tire of hearing ‘It’s in the handbook!’ as the catch-all answer for their pressing questions.

When I saw this picture of the Handbook For The Recently Deceased floating around Pinterest and Tumblr I got a little excited that someone had released a consumer version as a gag gift kind of thing. It wouldn’t really matter what the pages said (hell, just throwing in actual stereo instructions would be hilarious) but the cover is what would do all the work.

Imagine someone coming over to your house and seeing this book on your coffee table, that would definitely strike up quite a conversation wouldn’t it lol?

But alas after some searching I determined that the only “Handbook For The Recently Deceased” out there to purchase were these two (seemingly quite pale) imitations:

and Handbook for the Recently Deceased, neither of which relate to the movie Beetlejuice or even have the recognizable cover.

Too bad because I would have definitely bought one if it was! Oh well seeing the cover again after such a long time was good for a few laughs and definitely made me break out my Beetlejuice DVD that weekend.