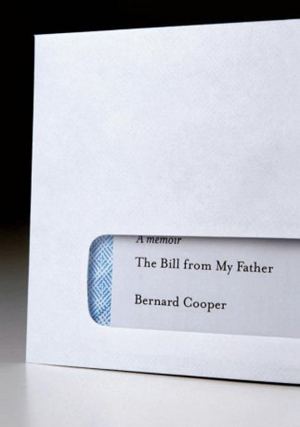 This book cover is quite stark, almost to the point of looking like nothing more than a dull stock photo.

But there’s just something about it that makes it stand out, not sure what that something is exactly but maybe it’s the uncommonly up close and personal view of this most commonplace of objects: an envelope.

Not even just any envelope but the mass mailer type that we get in the mail practically every day, the kind that usually contains some kind of statement or bill.

The envelope is gigantic within the scale of the book cover, it takes up almost the entire scene and frames the only identifying marks of the book, the words ‘A memoir – The Bill from My Father – Bernard Cooper.’

Interesting book cover aside, this cover had me at the word ‘memoir’ since I love all things of the genre. But what kind of memoir is it? The title ‘The Bill From My Father’ gives a bit of a hint, certainly it’s a memoir steeped in the topic of this person’s father and probably to do with a sense of something being imposed on him by his father.

The book description gives some answers and explains the choice of the envelope as the dominating element of the book cover:

“Edward Cooper is a hard man to know. Dour and exuberant by turns, his moods dictate the always uncertain climate of the Cooper household. Balding, octogenarian, and partial to a polyester jumpsuit, Edward Cooper makes an unlikely literary muse. But to his son he looms larger than life, an overwhelming and baffling presence.

As “The Bill from My Father” begins, Bernard and his father find themselves the last remaining members of the family that once included his mother, Lillian, and three older brothers.

Now retired and living in a run-down trailer, Edward Cooper had once made a name for himself as a divorce attorney whose cases included “The Case of the Captive Bride” and “The Case of the Baking Newlywed,” as they were dubbed by the “Herald Examiner.”

An expert at “the dissolution of human relationships,” the elder Cooper is slowly succumbing to dementia.

As the author attempts, with his father’s help, to forge a coherent picture of the Cooper family history, he discovers some peculiar documents involving lawsuits against other family members, and recalls a bill his father once sent him for the total cost of his upbringing, an itemized invoice adding up to 2 million dollars.”

This sounds like a really interesting memoir, I think The Bill From My Father is going to have to go on my (somewhat lengthy already lol) reading list.

This entry was posted in Uncategorized and tagged book cover, memoir, people. Bookmark the permalink.