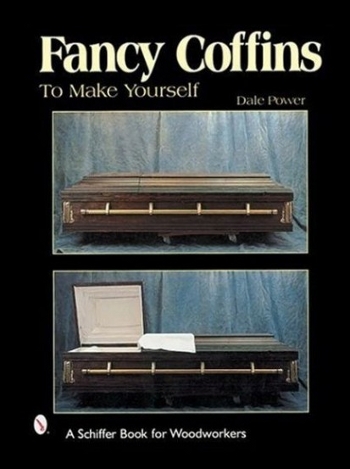 When looking at the cover for this book the first thing that caught my eye is the top picture which is of a wooden coffin.

This caught my eye because…well first off it’s a coffin lol and that’s a pretty unusual thing to see on a book cover. But also because the setup around the coffin is different than anything I’ve seen around any coffin before.

The coffin is backdropped not by a stand but instead by what looks like a slightly dirty or faded wrinkly blue sheet. And the coffin itself is resting on a bent wooden dolly with wheels.

A quick glance at the bottom picture shows the coffin with the half-lid opened up to reveal the inner lining and a decorative sheet draped over the middle.

At this point though I’m just wondering what the heck this book could be about. The two pictures are not only quite unusual to see on the cover of a book but they also have a very textbook feel to them. Textbook coffins?

The title of the book tied it all together, but was no less surprising imo: ‘Fancy Coffins To Make Yourself’ by Dale Power. 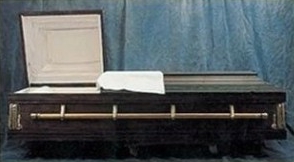 That’s definitely an uncommon book topic! I couldn’t help but to head over to Amazon to find out some more about it and to see if there were any user reviews. I was interested to see who was buying the book, what they thought about it, and if the homemade coffins worked out for them.

The book description talked about having 230 color photos and detailed instructions so that you’d always have step by step guidance with making your own casket. But a line from the description made me double take:

“This project might truly be your life’s finest accomplishment.”

So what did the user reviews have to say? Did people find the book useful and were they able to make their own coffins like the one on the book cover?

The results were not good. All but one of the reviews were from people unhappy with the book and included thoughts like this:

“The ONE coffin in the book is fancier than a plain pine box, but not by much. The coffin is poorly built, poorly finished and poorly described.

The photos don’t convey much information and the text isn’t much help either. The first rule of writting a “how-to” book is knowing “how-to”…” 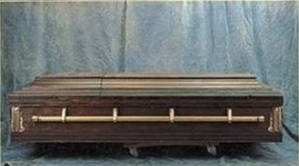 “This book should be entitled, “Build a coffin at Summer Camp”. “

“If you’re an amateur it will not help and if you’re a craftsman you’ll be appalled.

You could do better with your own imagination. If you need dimensions, call a local Funeral Home, they’ll be glad to help.

Amazon should pull this title from their inventory.”

Ouch. And the one positive review was just someone joking around, it starts out with the line “Finally! Something homemade that Grandpa can’t complain about…” and goes on to tell a crazy story.

So it looks like the consensus is this isn’t the best book to go to if you’re interested in making your own coffin. One of the reviewers even mentioned that you can get free casket making plans online that will work a lot better (who knew right? guess you really can find everything online). You’ll probably save yourself a lot of trouble if you leave the casket making up to the pros and just appreciate this book for it’s unique book cover, what do you think?

This entry was posted in Uncategorized and tagged funny, how to, weird. Bookmark the permalink.