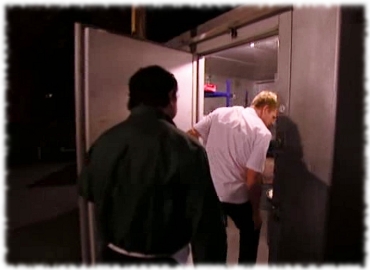 Awww shit, Gordon Ramsay’s going into Fiesta Sunrise restaurant’s outside fridge like a bloodhound on a mission.

If the staff at Fiesta Sunrise was willing to dump used chips back into the bin in full view of Kitchen Nightmares cameras, then certainly this fridge outside and behind the restaurant has some deep dark secrets to tell.

Gordon Ramsay at first finds many uncovered plastic containers (like the ones bus boys use to pick up dirty dishes) filled to the brim with blocks of unidentifiable Mexican food mishmash. 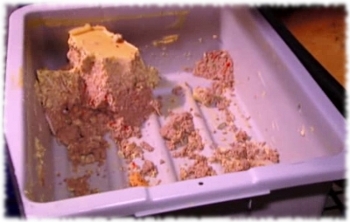 One of them even seems to have an upturned fly that has died on the slick surface of the semi-solid ground beef fat.

But the pièce de résistance of Chef Ramsay’s inspection finds is the ‘cement mixer’ refried beans. And there’s lots of it. Lots 0_0. 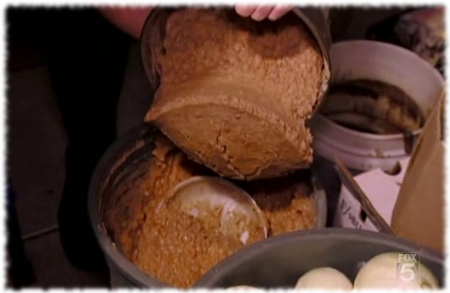 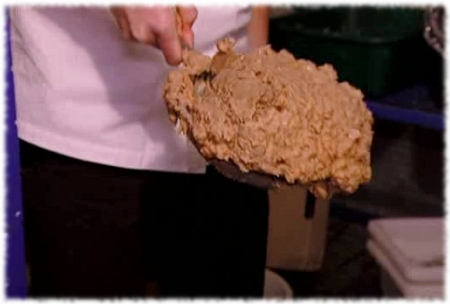 Who knows how old the refried beans are (old!) but it’s got to take Fiesta Sunrise ages to get through such a large amount of it, especially with business being so slow. 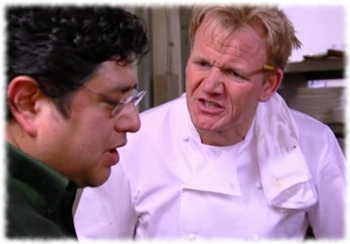 And there’s some nasty looking scoop just sitting there on top of the refried beans for the cooks to come by and scoop the gloop and take it back into the restaurant D:.

Gordon Ramsay makes Vic help him carry the Refried Bean Garbage Can Of Doom ™ into the kitchen, I can only imagine how heavy that shit is.

“THE FRIDGE IS FULL …OF SHIT!” yells Chef Ramsay, “I wasn’t here last Saturday but what were they expecting, 10,000 customers for lunch?”

Oh there’s 10,000 of something that showed up to eat at Fiesta Sunrise on Saturday alright, but they aren’t customers. But I’m getting ahead of myself.

“I wouldn’t trust you running a bath, let alone a fucking restaurant” he seethes while looking at Vic with equal parts anger, disgust, and sadness.

Vic is just standing there looking down at the beans. 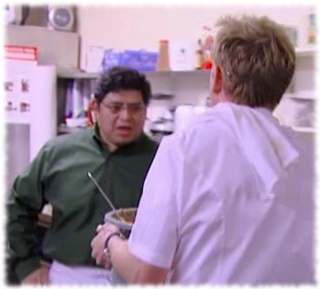 And next comes one of the most classic scenes ever in Kitchen Nightmares.

“I want to take that out there. I dare you, go ahead give it to them.” says Chef Ramsay to Vic.

Vic’s jaw drops and he absolutely refuses to show the trash can bin of refried beans to the customers, saying that it would be too embarrassing.

So seeing that there will be no team carry this time, Gordon Ramsay picks up the heavy ass refried bean garbage can and grunts that thing off to the dining room full of people eating dinner.

Good thing he’s in good shape otherwise he’d have gotten a hernia before reaching that empty table outside of the kitchen. 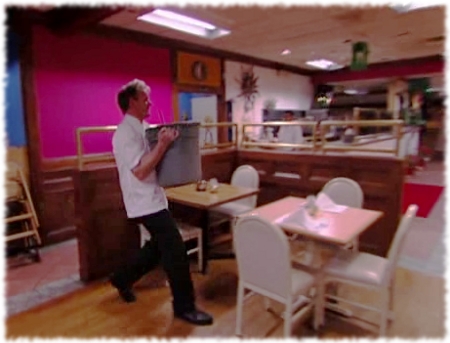 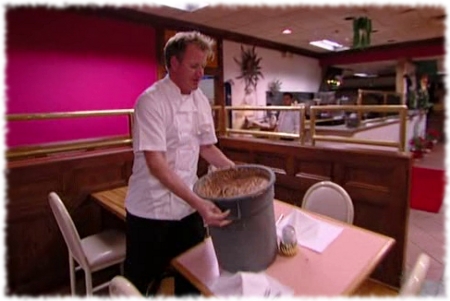 He makes it to the table and sets the garbage can of refried beans down on the table top, which promptly breaks under the weight of it all.

This lady’s face says it all… 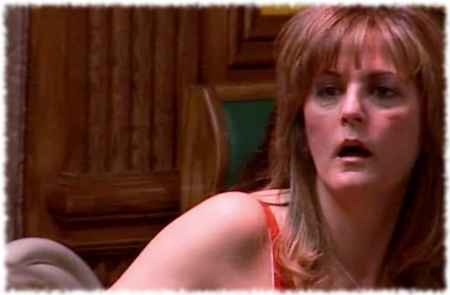 Chef Ramsay tells a guy who’s about to take a bite of his food “Sir, that thing in your hand …put it down. If you’ve just seen where it’s come from, like I have, you wouldn’t be eating it.”

Then all the customers come gawk at the trash can bin full of refried beans before leaving and presumably throwing up in the comfort of their own homes. 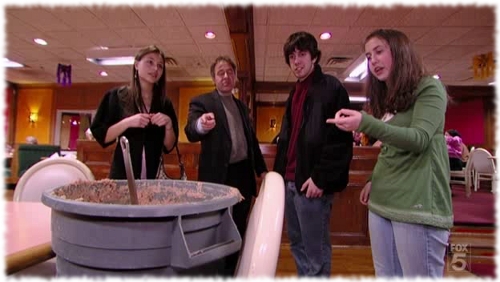 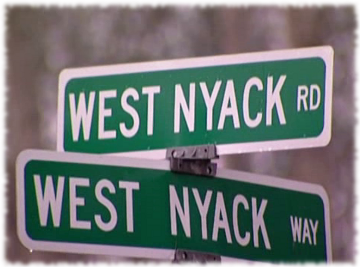 Looks like someone ran out of street name ideas pretty damn fast. 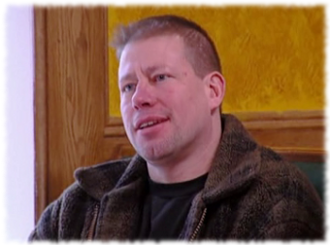 The narrator says Patti has asked her husband Don to come in and meet Gordon Ramsay (no mention of the show setting up the meeting, hmmm).

The idea behind this meeting is supposedly to try work through some of the marriage problems that have stemmed from Fiesta Sunrise eating insane amounts of Patti and Don’s hard-earned cash and credit, with no end in sight.

The narrator says “usually Don drops off Patti to avoid running into Vic”…no further explanation is given but I’m guessing it’s to avoid the temptation to beat Vic into a bloody pulp and then burn down the restaurant. Just a guess.

So the three of them sit down at a booth and Gordon Ramsay starts things off:

“…I’m absolutely furious in terms of the way the kitchen was run, the way the place was being abused…”

Er, is he setting the stage for Don to go off on Vic the next time he sees him?

Like Don really needs any more help with that I’m sure.

“…I can’t believe a guy like Vic would try to do so much under your own eyes, without even you knowing anything about it. Are you aware of what’s been going on?” 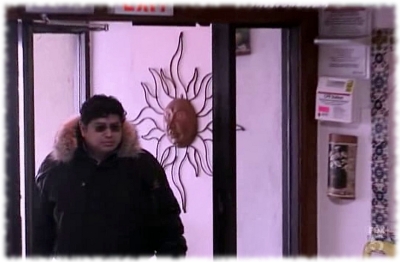 Translation: This dude Vic has been abusing your wife in plain view of you, did you notice? And don’t you want to kick his ass next time you see him, preferably in front of the cameras?

Cue Vic coming in the door (walking past another on of those dang sun sculptures hanging on the wall, but at least this one looked okay) and surprise surprise is invited to sit down by Ramsay.

It’s not long before shit goes down. Don confronts Vic about taking advantage of Patti’s goodwill and money without paying back a dime. Where is all the money going? Good question.

Don says “one month I payed $50,000”. Holy shit. At that point I would have done my own little takeover of the restaurant but whatever.

Unbelievably Vic counters this by saying to Don You don’t even have a job.” LAWL what? That’s just such and incredible thing for Vic to be saying to Don at that point, even I was offended.

Vic just keeps needling Don like Don is the deadbeat in this situation, I can hardly believe it. The producers of Kitchen Nightmares couldn’t have asked for more drama out of this. 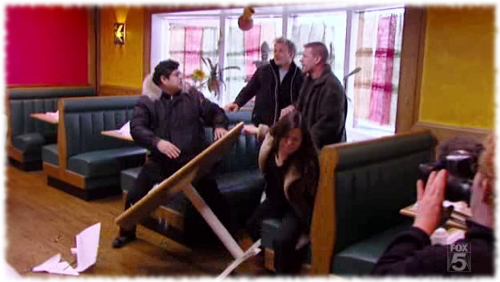 After having enough of Vic’s ridiculousness Don says “I don’t have a job? Pal, I got a job…

…in fact I pay my bills and I pay your bills too BITCH!”

*Patricia screams and runs off*

Gordon Ramsays like ‘aw shit!’ and breaks out into saying “Relaxrelaxrelax” and gets in between Don and Vic to stop the fight. But he looks at Vic like ‘you deserve this asshole.’

He then ushers Vic outside as someone from the Kitchen Nightmares crew (wearing sunglasses inside, why?) stays inside with Don. 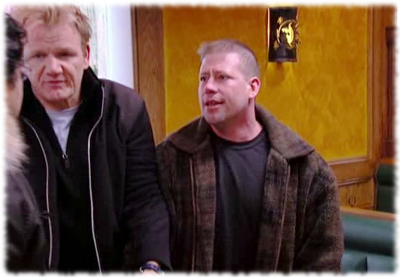 Honestly I think Vic is lucky to have survived that situation considering all the trash he was talking towards a person who was helping to keep Fiesta Sunrise afloat month after month.

Maybe Vic felt like he’d be safe talking all that trash because the Kitchen Nightmares crew would be around to break up any fights before it got too bad. Or maybe he’s just that arrogant and oblivious to reality.

In any case I don’t think the meeting resolved any marriage issues between Don and Patti, what do you think… 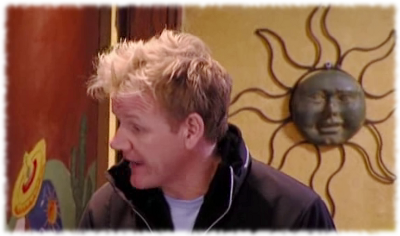 …or maybe the Fiesta Sun wall hanging has that look on it’s face because it knows what’s lurking in the kitchen at that very moment. 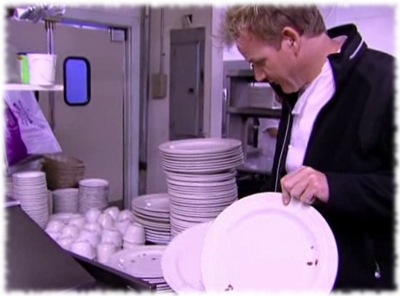 This is the one that I remember the Fiesta Sunrise episode the most for, and really how could anyone forget a scene like this?

It in many ways is like the show Kitchen Nightmares itself, horrifying and gawk-worthy at the same time, and everything the restaurant staff learns from the experience should have been obvious in the first place.

So in this scene Chef Gordon Ramsay starts to set up in a certain part of Fiesta Sunrise’s kitchen so that the owners of the restaurant can take part in one of those feel good Kitchen Nightmares exercises that marks the turning point of the show.

However, he runs into a problem. Or more like a thousand little scurrying problems… 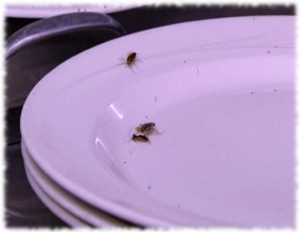 Cockroaches, so fucking nasty, blech no wonder Gordon Ramsay swears so much. The plates are just swarming with cockroaches. Fuuuuck.

They’re on all the supposedly ‘clean’ plates and cups and bowls and everyfuckingthing.

Just seeing all of them gives me the creepy crawlies, I can only imagine how horrible it must have been to discover the swarms of roaches after eating off a couple of those plates the day before.

Gordon calls the restaurant staff into the kitchen and confronts them about the roaches. The prep cooks and the dishwashers stand in the background and though they appear not to understand English all that well, I’m sure they get the idea that the roaches running all over the plates and cups is “No muy salidable.” 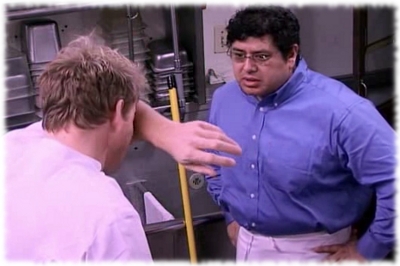 Gordon points to a bucket full of water that has plates in the bottom and roaches swimming on top, and asks the restaurant manager Vic:

And incredibly Vic says that yes in fact he did know all about this 0_0. Bloody hell.

After hearing Vic’s answer Gordon Ramsay looks like he wants to take the first plane back to the UK and forget all about Fiesta Sunrise. And who could blame him?