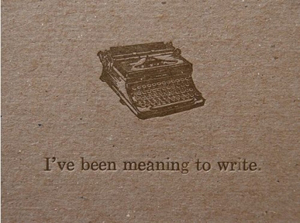 Advice on writing from a wide variety of sources and traditions. Updated periodically.

The root problems of the writer are personality problems.
-John Gardner

Long before I wrote stories, I listened for stories.
-Eudora Welty

I put things down on sheets of paper and stuff them in my pockets. When I have enough, I have a book.
-John Lennon

I put a piece of paper under my pillow and when I could not sleep I wrote in the dark.
-Henry David Thoreau

First there is the difficulty of writing at all.
-Dorothea Brande (Becoming A Writer)

When I am reading a book, whether wise or silly, it seems to be alive and talking to me.
-Anton Chekhov

…simply describing powerful emotional experiences (“She would never forget the wonderful feeling…” “He was more furious than he had ever been…”) is not the same thing as generating emotional responses in the reader.
-Dennis G. Jerz (Short Stories: Developing Ideas For Short Fiction)

We write to taste life twice, in the moment and in retrospect.
-Anais Nin

Writing always means hiding something in such a way that it is then discovered.
-Italo Calvino

Nothing in the world can take the place of persistence. Talent will not; nothing is more common than unsuccessful men with talent. Genius will not; un-rewarded genius is almost a proverb. Education will not; the world is full of educated derelicts. Persistence and determination alone are omnipotent.
-Calvin Coolidge

A good storyteller weaves a bit of magic into the world.
-Donnay Torr