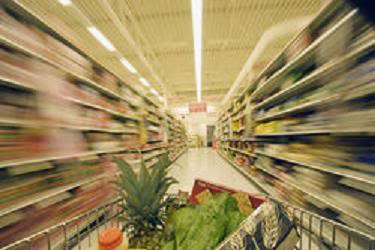 Gawkers. What the hell are you looking at? (Picking out salad dressing.)

Gawkers. What the hell are you looking at?

Jennifer and I have been together for almost a decade now. The defining relationship of my life, so tied to my identity, so tied to my day-to-day that most of the time I forget what a novelty it is for some people to see us together.

In my world ours is not a marriage preceded by a qualifying term: not a non-traditional marriage, not an interracial marriage, not a gay marriage. A marriage. It’s happy, fun, interesting, but also, well…mundane. Not in a bad way or anything. It’s just that after being together nine-plus years things like picking out what kind of salad dressing we want doesn’t feel like something to write home about.

Standing in front of the (unnaturally) large selection of French dressing I am focused on the dull task at hand. Jennifer asks me which one I think we should get, little do I know my answer will stop the other three shoppers around us in their tracks:

I don’t know darling, what did we get last time?

You know how after something really shocking happens in a movie or tv show there’s that tire screeching noise and suddenly everything will freeze frame? That’s exactly what happens after I say the word darling.

It takes a couple seconds for Jennifer and I to catch on. We’re just trying to get this mind numbing thing over with. Seriously, how different could 30 brands of French dressing really be from one another? We should just get the kind we got last time. But that one looks good too. That one’s low calorie. That one’s on sale. Maybe we should just close our eyes and point. But something’s suddenly feels different about this aisle…

The lady next to us is absent mindedly turning over a bottle of barbecue sauce in her hand, her head tilted strangely to the side. Hmm. Well maybe she is like us and having a hard time deciding which kind she wants. I mean there’s more kinds of barbecue sauce to choose from than French dressing. So it makes sense…kind of.

But the couple behind us to the left has suddenly stopped talking. Whatever they were chattering about before is forgotten and now they’re both just standing there staring at packages of spaghetti noodles with glazed-over eyes. Maybe it’s coincidence. Maybe this abrupt zombie-like behavior just happens to be normal for these three particular people. Maybe they’ve never heard the world darling before. Yeah right.

Jennifer and I keep talking but we exchange a quick glance. Her look says ‘Oh God they’re gawkers, here we go!’ We’ve been down this road so much that you think it wouldn’t be surprising anymore. On any given day if we are out shopping for more than a couple minutes our experience usually includes things like this:

I’m not sure what he expects. Maybe he thinks instead of benignly putting groceries on the conveyor belt we’ll jump on it and start making out or something. All the way up to the time he is forced out of the checkout line by the cashier (Sir? Here’s your receipt sir.) he’s stealing sideways glances at us. He leaves looking disappointed.

*Standing next to Jennifer in the furniture section, I make a goofy comment about a funky looking piece of furniture. She laughs and lays her head on my shoulder for a sec. ‘You’re such a dork darling.’ she says lovingly. The people walking by almost trip and fall. They recover and attempt to walk by as casually as possible, trying look at us without turning their heads in our direction.

*Jennifer grabs a case of Pepsi and I’m thinking about whether to go with Coke or Sierra Mist. The guy in the next aisle over nudges the lady he’s with and points us out with a roll of his eyes. Look, lesbians picking out soda. They hang out and animatedly share this joke between them until I take my Sierra Mist and we turn our backs to them and walk off.

*Jennifer is talking to somebody and refers to me as her wife. A lady shopping near us audibly gasps and immediately ushers her small children away from us. The kids stare as they’re being drug off.

Gawkers. Ten years of this and I’m still baffled every time. Whether they’re gawking with their eyes or their ears. Whether they are using my sacred loving relationship as a punchline or simply staring out of curiosity, I never know what to do. Or if I should do anything at all.

One half of me, the kind and understanding part that thinks in time with the speeches of MLK, feels like the right thing to do is just be patient with people who are ignorant. Or those who are trying to work out how they feel about other people’s relationships.

The other half of me, the one with the sensibilities of Lewis Black says These fucknuts have lost their goddamn mind! There’s only one way to help them! March over there and tell them to stop staring before you knock them upside the head with this box of Hamburger Helper that you were miraculously able to pick out *despite* all the gawking.

Either way is probably too extreme lol. Maybe we should just stare back. Maybe we should say loudly ‘Gee, I hope nobody in this aisle is listening in on our boring conversation about French dressing!’ Maybe I should just turn to them and say ‘What the hell are you looking at??’ But in the end I don’t think any of that would even make a dent in the problem.

The issue is that we are two women who are happily married and are (gasp!) openly affectionate with each other in public during a time when sadly this kind of interaction is still an unusual thing. The gawking won’t stop until more people catch up to the fact that gay relationships are filled with the same tedium as non-gay ones (What do you want for dinner? I don’t know what do you want? I don’t know, I picked last time. Nuh-uh. Yuh-huh.).

We decided on Kraft Catalina French Dressing by the way. No thanks to the creepy gawkers.