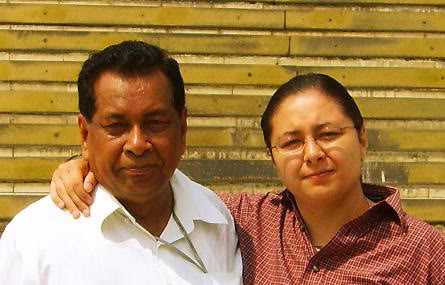 Going to Indonesia. And meeting my Dad. After twenty years. (Part 1)

Well I’m back :). For those of you who didn’t know I’ve been in Indonesia the past few weeks visiting my Dad. I hadn’t seen him in twenty years and had never met my stepmom or little brother and sister before. So as you can imagine it was some pretty intense stuff. It was like years and years worth of experiences crammed into the span of a couple weeks. I haven’t had nearly enough time to process everything…it’s going to be a while. In a lot of ways I’m still in a state of shock from reading that first email my Dad sent me back in July.

There’s a lot I want to write about the time I spent in Indonesia. The insane swarm-like Jakarta traffic alone could fill a whole blog and video (and it probably will lol). But first I’m going to write about the very beginning and the very last part of the trip. I ended up having to leave Indonesia over a week early. Don’t worry, my Dad was awesome and we got along (and are) getting along really well. But getting along doesn’t always solve every problem. Can you guess what the issue was? Yeah, I never get tired of dealing with that (/sarcasm). I wonder if I’ll always spend this much of my life just waiting for one person or another to catch up with things. But anyways, I’ll tell that story in part 2.

The rest of this blog is a direct copy of what I wrote in my travel journal on the way to Jakarta. I thought it would be fun to post some unedited writing, even if it does sound a little goofy sometimes… 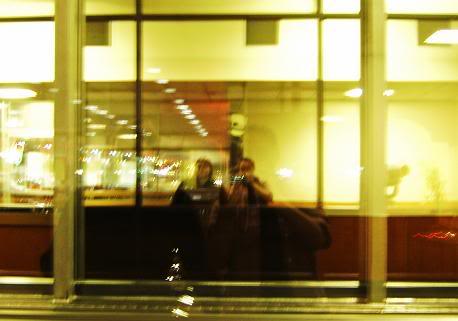 (Jennifer and I at the Anchorage airport)

So here we are. Waiting for our plane. And the 10 hour flight. Waiting sucks but at least today is the day when we finally get on with the trip. I’m finally getting more excited about the whole thing now that we’ve actually started. I think all this sitting around is already getting to Jennifer tho. She is bored and tired, layed out on the long strip of black chairs next to me.

Oh my god, I have never ever heard anybody vaccuum so long in my entire life! (Jennifer)

The lady vaccuuming the cocktail lounge has no clue what kind of aggravation she’s inspiring on the other side of the glass walls. It doesn’t bother me, though I have to admit that he Orwellian ‘threat level orange’ announcements are already wearing me down. The tone of the announcements reminds me of sci-fi movies where the spaceship is self-destructing and everyone is being told to evacuate to escape pods.

Our plane pulled right up to our section of the waiting room. It’s nose easily filling the two windows. It’s gigantic, probably the biggest plane I’ve been in so far. The people getting off of it shuffle sleepily. Already Jennifer and I are the cultural outsiders in the group around us. We’re all impatient to get on, so we can do pretty much the same thing we’re doing now…But with less space and breathing recycled air. But at least we’d be moving, that’s something.

Somewhere between Anchorage and Taipei 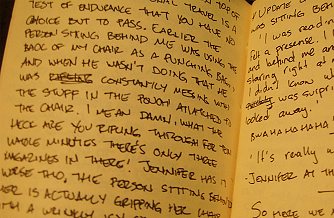 (Written on a plane in semi-darkness on a tiny, tiny table.)

So here I am. In economy class, AKA sardine class. I think these are the same kind of chairs that they use to get confessions out of criminals. Tho I have to give props to the staff of China Air, who seem to be on top of everything. International travel is a test of endurance that you have no choice but to pass. Earlier the person sitting behind me was using the back of my chair as a punching bag, and when he wasn’t doing that he was constantly messing with the stuff in the pouch attatched to the chair. I mean damn, what the heck are you rifling through for ten whole minutes there’s only three magazines in there!

Jennifer has it worse tho. The person sitting behind her is actually gripping her chair with a wrinkly icy cold hand of death lol. I mean how fucking rude, it was so bad that one time that (s)he actually pulled her hair. Despite all this we’re still really really excited. But there’s still four more hours…on this flight lol.

**Update on the creepy lady who was sitting behind Jennifer:**

I was reading my book when I felt a presence. I looked over to my left and behind me and the lady was staring right at me!!! I was so shocked I didn’t know what to say. She was surprised too and quickly looked away. (Jennifer)

So here we are. Sitting in the Taipei airport looking down the barrel of a 6 hour flight. And then we’ll be there. I should be way more nervous. But whatever.

Somewhere between Taipei and Jakarta

Wohoo, last flight! I’m actually not nearly as tired as I thought I’d be at this point. Only a few more hours and all this sitting will be over.

You know it’s a bad sign when the stewardesses run out of their workroom to jump in chairs and buckle themselves in lol.

I like the crowd on this flight a lot better than the first one. Everybody is so much more polite and, well…quieter. And it’s sad because this flight I’m sitting next to somebody with a baby and it’s still way nicer lol. The color of Jennifer’s skin is starting to attract a lot of attention now. We’re sitting in the front of the plane and I can feel the eyes on us. It’s only going to get worse but hey, it’s really refreshing to get stared at for something other than the usual crap.

About halfway into this flight I start to get nervous. We are walking into a situation with so many unknowns, who knows what will happen. And will it be awkward when I first meet my Dad? I worry that he won’t like me -a very likely thing since I’m the antithesis of what he wanted in a child. Or even worse, what if he’s not nice to Jennifer? That would be a total deal breaker for me. She keeps saying that it would be okay if they treat her weird and that she doesn’t care…but I love her too much to settle for second class treatment. Anyway, there’s too much going on in my mind and I have to make myself listen to the iPod and relax. I’ll deal with whatever the situation is like when I’m actually in it.

The plane lands. We’re here. In Jakarta. Holy crap. Literally the moment we step off the plane we feel the heat and humidity covering us like a blanket. Dad said he would meet us at the gate but he’s not there. We can’t stand around worrying about that right now though since we need to hurry and get our ‘visa on arrivals’ done and get to our baggage ASAP.

The visa line is full of pushy people and cutters. Who knew that getting a visa would be so treacherous? Damn it’s like dog-eat-dog in this thing, but at least the line’s moving fast. Soon we’ve got our bags and are thinking about what to do next. Once we go through customs there’s no getting back into this part of the airport so we do one more search and then head out. Damn I hope my Dad’s around here somewhere or else things are going to get a lot more complicated real fast.

After the screening we’re funneled into a hallway that gives us a choice of going right or left. At the far end of each one are crowds of Indonesians. Jennifer and I stand in the middle with our heads going from one side to the other. Finally she says, ‘Um, which way should we go?’ Hell if I know, but I’m about to make a decision when we hear somebody yelling from the left side. ‘Hey, over here!’

We’re the only ones milling about indecisively so that must be for us lol. As I get closer I see my Dad standing behind a long waist-high metal barrier. It kind of looks like a gate.

So here it is. The moment. What’s it going to be like? Just a few more steps and we’ll close the gap of almost 20 years between us.

Hallo, let me take that for you.

Meanwhile Jennifer’s off to the side giving me this wide eyed look like ‘OH MY GOD just let him take the damn bags!’ She’s a little stressed right now.

So I hand them over and we follow him as he leads us out of the crowd of people. All the while Jennifer’s whispering behind me ‘You should give him a hug!’ I know. But we have to clear the crowd first. My impressions at this point are: he seems really nice and kind of shy.

How about a hug Dad?

A hug? Yes of course.

Nice to see you again. Finally.

Nice to see you too.

Yay the hug wasn’t awkward, that’s a good sign. I introduce him to my wife and we head over to a taxi.

(My Dad and I. As you can see the grumpy demeanor is definitely hereditary.)

The drive really ushers in the fact that we’re in a totally different environment now. It’s not just the landscape that’s changed, but…well the funniest thing keeps happening. Whenever somebody that’s driving by sees Jennifer they will literally crane their neck to stare and her. If I write about this in my blog I’m not sure how to describe it without sounding like I’m exaggerating. I’m talking about shocked, potential accident causing stares here.

I mean, I had warned Jennifer about this because I remember what it was like for mom to be a bule in Indonesia…but I had forgotten about how intense it was! It’s so hillarious I can barely contain myself. I’m thinking that breaking into hysterical laughter at this point might send the wrong message to my Dad. He’s in the front seat making really nice conversation with me, totally unaware of the hillarity going on in the back. Remember that Eminem song that goes ‘Y’all act like you never seen a white person before!’? Yeah.

It’s an hour’s drive before we even get to the house Jennifer and I will call home for the next three weeks, but already so much has changed…