Overture To Acts Of Murder 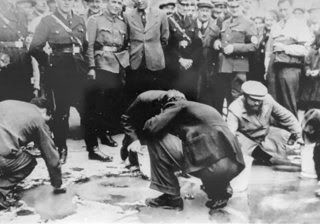 Â Â Right now I’m reading this book called ‘Leap Into Darkness’ by Leo Bretholz. It’s a true story about a Jewish boy who evaded the Nazis and survived the Holocaust by crisscrossing Europe.

Â Â Awesome book. The best thing about it isn’t the story itself, but the striking insights of this young man caught in the insanity of those times:

Â Â I stood at the edge of one crowd, held back from interfering, yet knowing there was nothing I could do to stop the cruelty. I watched people on their hands and knees forced to scrub the street. They kept their eyes downcast in fear and humiliation. I glanced nervously about and wondered if some bullies might come for me. Those on their knees struggled for some sense of dignity; I watched them, because to turn away was to cease witnessing the overture to acts of murder.

Â Â ‘overture to acts of murder.’ To me those words are a reminder of what the true implications of prejudice are. And how important it is to be real about prejudice in my own life and within myself.

Â Â Murder can take different forms. You can murder someone physically. You can kill their spirit. OrÂ strip them ofÂ their humanity. This book illustrates in heartbreaking detail how the Nazis became experts in all the many shades of murder.

Â Â Here’s a bit of old Nazi propaganda. Check out how this vid tries to teachÂ the viewerÂ toÂ dehumanize poverty strickenÂ children.Â It was a very short jump from this to the Holocaust: