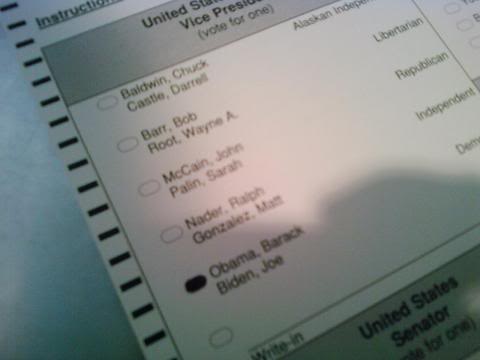 Panic attacks. And voting. And how to fill out a ballot in Alaska.

(Photo courtesy of Jennifer. Unless it’s illegal, then I did it.)

I had written a fairly long blog telling the story of going to vote this year but um, it kind of sucked. So here it is without all the fluff:

1. I pretty much lost my mind after Jody died and the experience of going to Washington for his funeral made things even worse. At the airport I had to walk through the same gate that Jennifer and I had waited at two weeks earlier. The spot we had stared at for hours waiting for him to come home and wondering where he was. The second time around there was a part of my mind that was still looking for him. There were a lot of military people and every other person in brown fatigues looked just like him to me.

I felt the crush of people at the airports, on planes, in the cities we drove through, and on the faded green lawn of the veteran’s cemetary. I came back to Alaska with a serious phobia of going out…I’m talking about uncontrollable shaking and panic attacks and all that. This is why except for at the memorial, pretty much no one has seen me for the last couple months.

2. So when the first few days of November came around I wasn’t sure that I was going to make it out of the house to vote.

3. I had registered to vote twice after moving to Anchorage but for some (mysterious) reason I was still counted as living in Juneau. Which meant that I had to put in for a questioned ballot. Which meant sitting at the polling place and filling out paperwork. Which is not something you want to do when you have horribly crippling anxiety attacks triggered by being out in public for any length of time.

4. Jennifer made me go. She knew that voting is important to me and that I would regret not going. She also didn’t want me to turn into a crazy person that doesn’t ever see the light of day for months at a time.

5. I started to panic before even leaving the driveway. Luckily our polling place is only a couple minutes away.

6. I freaked out a couple of poll workers, which was really embarassing. I don’t think the election volunteer ladies are used to people having nervous breakdowns while looking for their voter ID and filling out paperwork. They were obviously disturbed by the whole thing but were very nice about it and even double checked to make sure I filled everything out right.

7. Let me sit you down next to this gentleman…er…lady? I got identified as a guy, something that’s happening to me more and more as I get older. Not sure how I feel about that.

8. When one of the election volunteers was going through the whole ‘this is how you fill out a ballot’ speech to Jennifer the lady very distinctly pointed at the McCain/Palin line several times. Ha. Does that really work with people?

10. My ballot is one of those absentee/questioned ballots being counted right now that are breaking for Begich. Hopefully it’s BegichFTW! but we’ll see…even after multiple convictions it seems like a lot of Alaskans still love themselves some Ted Stevens.