Another Mysterious Drink: Cartman’s Not So Chocolate Milk 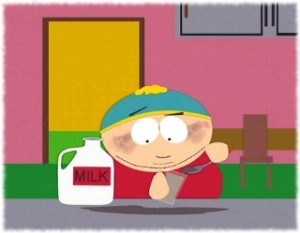 Those of you that read the story of The Mysterious Drink (*spoilers ahead, if you haven’t read the story go here and check it out first*) will be interested in a comment that longtime blog reader Anon left in the comments section of that story:

hey, this reminds me of that episode of South Park where Cartman drank Kenny’s ashes thinking it was chocolate milk mix.

Lol I’d definitely never seen that episode before but luckily there was a clip of it online that showed that particular scene.

So Cartman, Stan, and Kyle break into Kenny’s house through a window. Kenny has died (are you surprised) and they want to try and get a ticket or something that was in his pocket when he died. 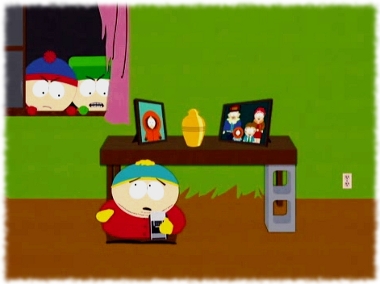 They think the urn is just a weird looking teapot and that his bones will be in the urn along with everything he had on him when he died, including the ticket.

However, they get quite a surprise when they open up the ‘teapot’ at Cartman’s house and nothing but dark powdery stuff comes out of it. Kyle and Stan get so pissed that they leave but Cartman lingers, deciding that he might as well make the best of it. So he grabs a jug of milk and a glass and proceeds to stir the ‘chocolate milk’ powder into the milk and takes a sip.

“Hey, not bad” he says while smacking his lips happily.

So was this inspired by the the old urban legend of The Mysterious Drink, or did the writers of South Park come up with this twisted scene all on their own?

One thing I know for sure is that it was interesting to see The Mysterious Drink story reversed a bit, where the audience knows all along that the ‘drink mix’ is the ashes of a dead person instead of finding out at the end of the story. Either way the result is pretty cringe-inducing don’t you think?