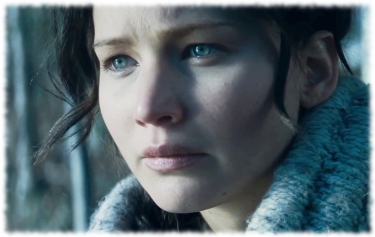 It intros with Katniss Everdeen and Peeta Mellark being presented to a crowd as the glorious victors of the latest Hunger Games.

It’s supposed to be a celebratory time but there’s something wrong.

You can hear the cheers of the crowd through the closed doors, but as the doors open and Katniss and Peeta walk through we see on the other side that there are two scary looking uniformed guards controlling the doors.

These are the so-called Peacekeepers and their presence isn’t a good sign. 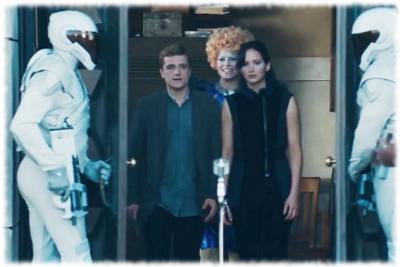 With faces hidden by helmets with black visors and wearing body armor, their humanity is entirely covered by their government issued uniforms.

And while they open the door for Katniss and Peeta with one hand the other hand holds a weapon at the ready.

The first 20 seconds of the trailer for Catching Fire gives a flavor of things to come for the two Hunger Games champions, their life saving strategy at the end of the game in the last movie has made them a symbol of hope to the common people of Panem …and an ever present threat to the ruling class.

President Snow realizes just what a huge threat all the Hunger Games champions have become, especially Katniss, and sets a vicious plan in motion to wipe them out…

I think the scene where Katniss pleads with Haymitch in a panic after seeing the old man get executed is especially symbolic of the major problem she faces in this story:

“Haymitch please just help me get through this trip.”

“This trip doesn’t end when you get back home…” 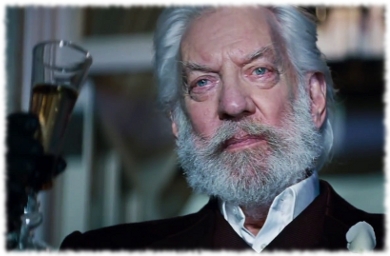 As much as she doesn’t want to, at some point during Catching Fire Katniss will have to face the fact that President Snow has no intentions of ever letting her just be.

It doesn’t matter how much she tries to play along as a pawn in his games, it’s never going to be enough. This means she has some hard choices to make, while she still has the time.

I actually just started to read the book Catching Fire a few days ago and seeing this trailer has made me want to get into it more. I’m looking forward to the movie of course but this way I don’t have to wait until November to get a Hunger Games fix and see what happens in Catching Fire.

Plus, no matter what the series to me the book almost always ends up being better than the movie :D.