The Ender’s Game Movie: What The First Trailer Reveals 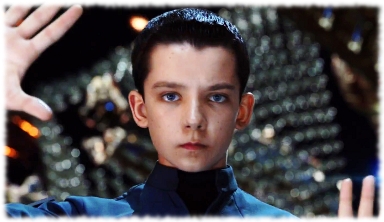 It’s no understatement to say that the story of Ender’s Game has a special place in the hearts of many, myself included.

It’s one of my favorite books of all time and I’ve been hearing rumors of a movie being made about it for many years now, but each time it always seemed to fall through in one way or another.

So when it recently became clear that the movie was definitely being made I was ecstatic …and then scared lol. 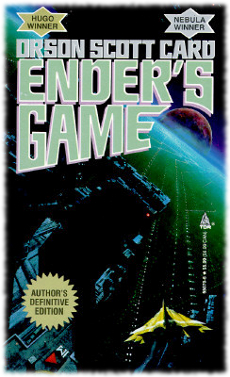 Scared because I was afraid the people responsible for the movie would mess it up in that horribly disappointing way that I’ve seen done to other movies based on books.

I know that movies can’t (and shouldn’t) be exact copies of whatever book they’re based on, and that the book is almost always better. That’s okay. But if the movie wrecked the story of Ender’s Game that would definitely not be okay and I’d be bummed out big time.

And then fairly recently a picture of Ender looking into the Battle Room at kids fighting each other. Along with this last picture came the information that in the movie the room would be a sphere and it’s walls like windows, instead of a cube and solid walls like in the book. The kid soldiers of the Battle Room in the movie will be able to look down on the Earth as they’re fighting.

These all seemed ok (such drastic changes to the Battle Room seemed a little worrying, but also like they could be cinematically awesome if done right) 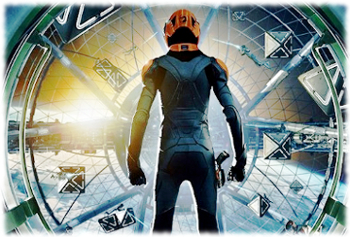 but I knew that a true sense of what the movie was like wouldn’t be possible until I saw the first trailer.

So when Jennifer told me that the Ender’s Game trailer had finally come out I jumped right over to YouTube, hit ‘play’, and then braced myself. Bad acting, bad set, stupid changes, not following the spirit of the book, these are the things that I worried about seeing in the trailer since they would tip off that the movie would probably suck.

The trailer starts out with rapid clips of people in fighter jets desperately trying to fight off an attack by alien ships. They are vastly outnumbered, with massive groups of alien ships swarming around at great speed and easily blowing the jets to bits. You get a sense of the panic of the fighters as the visuals from the battle burst out at you.

Then a voiceover by Colonel Graff (played by the ever awesome Harrison Ford) saying:

They know our strategies. They’ve learned our weaknesses. And the alien attack nearly destroyed us. 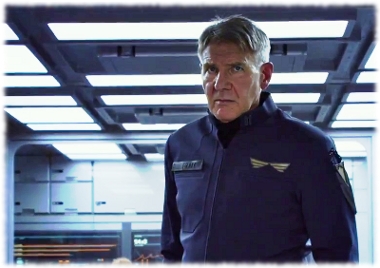 That must never be allowed to happen again.

We see a very intense and stressed Colonel Graff looking out with worry onto a blue Earth below.

And this bit about the Earth sets the tone for the rest of the trailer. Earth is what needs to be defended, the planet Earth and all those that reside on it’s surface is the entire reason that these children are being sent out into space in the first place. They voluntarily endure a fucked up life in the hopes of becoming the right kind of weapon to keep Earth safe from a looming 2nd invasion attempt by aliens.

Earth is front and center in the trailer and I’m guessing it will be prominently displayed throughout the movie too, as a dramatic visual reminder of what’s at stake. 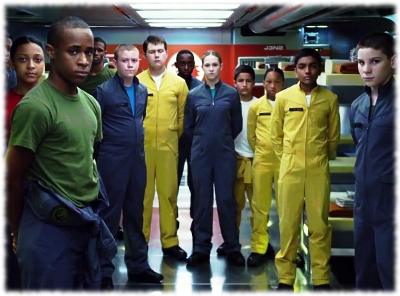 This also explains the decision to make the Battle Room walls clear and overlooking the Earth.

As the kids battle it out with each other the Earth will always be there as a backdrop, showing the connection between these brutal games and the reality of what they’re for.

Now that the problem has been laid out, Colonel Graff’s voiceover moves on to the solution. Or what they hope will be the solution anyway.

If we’re going to survive we need a new kind of soldier. One who doesn’t think the way we think. Fear the things we fear. One the enemy would never expect.

Meaning the kids at Battle School –and in particular Ender, on whose shoulders the survival of the entire human race now rests…

Well, I can say with much relief that I’m really happy with what I saw in this trailer. 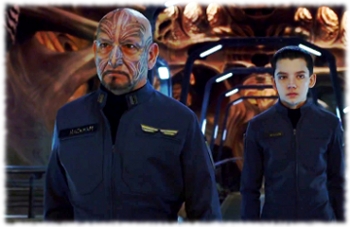 The visuals were done beautifully, not a trace of over the top hokey sci-fi stuff to be seen anywhere, and the various settings thankfully looked very believable.

The acting was good and each of the main characters in the trailer conveyed intensity without being over dramatic or fake. Mazor Rackam looked pretty badass with those Maori face tattoos too, something that wasn’t in the book but I think is a great addition to his character.

And best of all everything seemed to be in keeping with the spirit of the book. It’s only one trailer, but I didn’t get the feeling that the movie is likely to wreck the story. That might seem like a small thing to some people, but as a long time Ender’s Game fan that’s music to my ears ;).