Living Off The Grid In Alaska (Formspring Question) 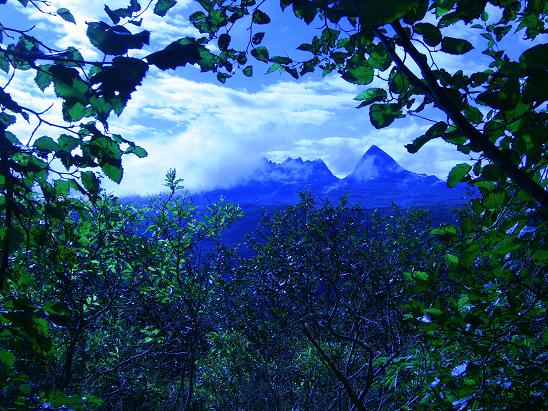 (View from a camping trip in the mountains Jennifer and I took one year.)

How do you and Jennifer support yourselves out there in the wilds? I am always fascinated by ppl who are somewhat off the grid because I always wanted an “alternative lifestyle” but keep ending up locked into the system more and more.

Hi, Thanks for the question:)

I’d like to say that Jennifer and I are all cool and off the grid but we actually are fairly plugged in all in all. Jennifer has a normal job and I do normal house wife stuff. If you made a movie of a random day in our lives you probably wouldn’t be able to tell that we were in AK vs. the lower 48. Well, except for the panoramic mountain views in the background :D.

The distance between Alaska and the rest of the US is quite large though, and in that way we -are- off the grid. It takes a fair amount of money and effort to even get to the next closest state let alone someplace in the south or on the east coast. This is a bittersweet thing for me because one of the qualities I love most about Alaska is it’s pristine wilderness, something that’s only possible due to it’s isolation. If I want to I can head out of town and in less than a couple of hours take a step where no human has gone yet. That’s just freaking amazing to me and my time in the wilderness has been key in recovering from what was by all accounts a seriously horrible childhood.

But being off the grid is also sad for me because there’s a lot of people that I’d like to see right now but can’t. There’s no just taking the weekend off and jumping in the car for a few hours to go visit them. Things have to be meticulously planned out and airfare saved up for. How do we deal with this? We do go to the lower 48 a couple times each year but we never get to see all the people we want to, that’s just how it is. I think this might change sometime in the future though, the internet is changing things at an ever increasing rate and I predict that Jennifer and I will have no choice but to travel more and bring more people up to AK.

So -you- want to live differently and be more off the grid? I think that being off the grid at any level starts with a change in mindset and a sorting out of priorities. Like for some people it might be relevant to ask themselves which is more important, having use of a car all the time or being more off the grid by taking a bike everywhere? Life changes a lot when you use a bike as your main source of transport, whether it’s good or bad depends on your mindset and priorities :D. I think if your mind truly changes then your life will follow and won’t be so locked into the system. Feel free to challenge me on this though and I’ll post my responses!

For examples of what extreme off the grid living is like you might want to check out any of the movies made about Dick Proenneke (‘Alone In The Wilderness‘, ‘Alaska Silence And Solitude‘ are a couple that have footage that he shot himself) if you haven’t seen them already. He’s a guy who said to heck with conventional living and lived alone out in the Alaska wilderness for 31 years until age 82! Hell yea pretty hardcore stuff lol. But even he wasn’t entirely off the grid and had a few supplies flown in every once in a while, so don’t feel bad about being tied into the system a little.