The Man Who Just Sat There And Stared At The Screen

I was listening to a talk by a Google employee a couple of years ago and he (she? I can’t really remember anymore) was telling a story about something very odd that happened during one of Google’s rounds of user testing. 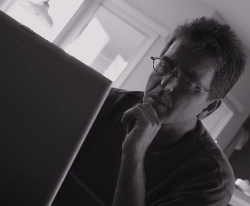 Basically for this user testing they put people in a room by themselves and set them up in front of a computer connected to the internet. The idea was that the person was supposed to use Google in whatever way they wanted so that the Google employees could get a better understanding of how people use the site.

So they had set up this one man and then they went to the other room to observe what he did. He typed in www.google.com into the browser and sat there. And… pretty much just kept sitting there.

Time ticked by and he just sat there and sat there without typing anything into the search box or clicking a link. The Google employees were puzzled and thought maybe something was wrong.

They went back into the room and asked him if everything was all right and he said yes. At that point they were doubly puzzled because of his response so they basically said ‘Sooo, whatcha doing then?’ and he said:

‘Well, I’m waiting for the page to load.’

I’m guessing that most of us are familiar with the trademark simplicity of Google’s home page, but apparently this guy had never seen anything like it. He thought that there had to be more to the page than a logo and the search box so he was patiently waiting for the rest of the website to show up.

Just goes to show that you never really know how someone will react to something until you actually have them try it. In this man’s life experience web pages just weren’t that simple (he must have been using Yahoo a lot lol).

If no one had come back into the room who knows how long he would have sat there just waiting for the page to load, not to mention how he must have been thinking ‘This is the slowest loading page in history!’ the whole time.

How To Know When You Are Busted

The age of texting has brought us not only an easier way to communicate but also a way to record the day to day stories that happen to us, whether we like it or not. 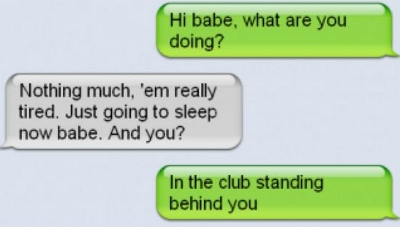 Lol! Thanks to Jennifer for passing this one along to me. I can only imagine the look on the lying guy/gal’s face when they looked up from their cell phone and turned around to face their angry spouse.

The Guy Who Refused To Use A Cell Phone

Can you imagine going a day without being arm’s reach from your cell phone?

I saw an episode of an Outer Limits/Twilight Zone type show when I was a kid about a guy who tried to do just that …and got locked up in a looney bin for it. 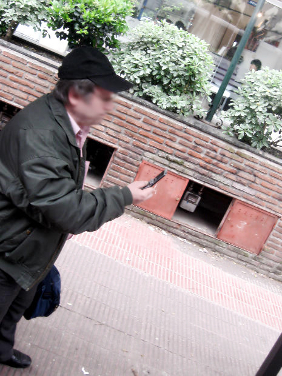 The show was set in a futuristic world where people never went anywhere without their cell phones. The main character in the story was a guy who at first lived the normal life of that world, barely going a few minutes without some sort of interruption from his cell phone.

But one day he started to crave silence and uninterrupted time with his own thoughts. He started to seek out even a half hour by himself but inevitably he’d get a phone call. The phone would ring and ring and ring, and even if he didn’t answer it there was still the ringing echoing through the room.

Finally he decided to get rid of his cell phone. I don’t remember if it was considered a crime in that world or what but it was definitely considered an extreme act. An unfathomable act.

The authorities immediately got to him and asked “Is everything all right?”

Long story short, they ended up locking him up in a looney bin. At first he raged against the padded walls trying to yell to his jailers that there was nothing wrong with being without a cell phone. 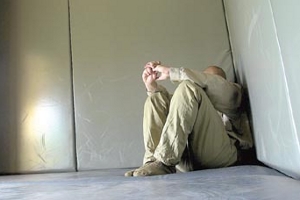 Eventually though he resigned himself to his situation and even realized that it was all right, there were no cell phones inside the padded room and he could have as much uninterrupted time as he wanted.

As for me… well I like my cell phone a lot and consider it one of the most useful tools I’ve been lucky enough to own. It’s not a phone really, it’s a computer that has phone capabilities and it enables me to do all sorts of fun and wonderful things. There’s some downsides to being connected 24/7 but it’s nothing compared to the great stuff.

Give up my cell phone? No way in hell, what do you think I am …crazy? :D